13 of our athletes compete for glory at Commonwealths

The Commonwealth Games in Birmingham will feature 13 athletes supported by the Derbyshire Institute of Sport early on in their career.

This accolade is one of the key reasons why the institute exists – to help athletes reach the top of their sport.

Among them will be Chesterfield’s Liam Pitchford, 29, competing at his fourth Commonwealths for England. He won gold in Australia in 2018 in the table tennis doubles with Paul Drinkhall.

Buxton's Abbie Wood can't wait to be back swimming in front of her parents and packed stands in Birmingham.

Abbie, 23, has become one of British Swimming’s most promising athletes in recent years at Olympic, World and European level inr ecent seasons.

She has not competed in front of friends and family since the Commonwealth Games in Gold Coast four years ago.

And with fans back in Birmingham this summer, Wood is pleased her parents will be able to watch her go for gold at the Sandwell Aquatics Centre.

“My parents have got tickets so just being able to see them in the crowd will be so nice, because it’s been so long since they’ve got to do that,” she said.

“This will my first time I’ll get to swim at home and is just the motivation I need,” Abbie told ITV News.

She won two European titles in2020 and reach three finals at the Olympic Games last summer.

She missed out on a medal when she finished just 0.11 sec behind American Kate Douglass in the 200 metres individual medley in Tokyo.

Team England’s Jamie Ingram, who learned to swim at Ripley, said it was going to be ‘phenomenal’ to compete in front of a home crowd. He is making his England debut at the Games.

“It finally does feel real,” he said. “It felt more real when the team announcement came out and now this is like, wow.

“Now we know where we’re going to be, we can visualise racing here rather than conjuring up an image in your head. You can see it now, it’s going to be so exciting to compete here.”

Ingram has had an impressive season so far after winning his first national medal at the British Swimming Championships in April taking the bronze in the 100m Butterfly in a time of 52.46.

Heanor-born Dave Ellis goes in the men’s PTVUI para triathlon with his guide Luke Pollard. Dave has ten per cent vision and had a terrific end to 2021 after the disappointment at the Tokyo Olympics when a mechanical fault on their bike ended his race.

A fourth European gold in Valencia was followed with world gold in Abu Dhabi to end the year as world and European champion.

DIS’s track cyclist alumni are Charlie Tanfield, Dan Bigham and Will Perrett who ride for England with Kyle Gordon and Jonny Wale going for Team Scotland.

Founder and managing director of the Derbyshire Institute of Sport Chloe Maudsley said: “This is most athletes we have had included in any games following the ten who went to the Tokyo Olympics and Paralympics last year. It’s our lucky 13!

“It is so rewarding to know that we helped these elite athletes in the early days and they are competing right on our doorstep. It is thanks to our sponsors who help fund our sporting schemes that they are there at all.

“I can’t wait to see how they get on. Our cheers from Derby will be heard in Birmingham!” 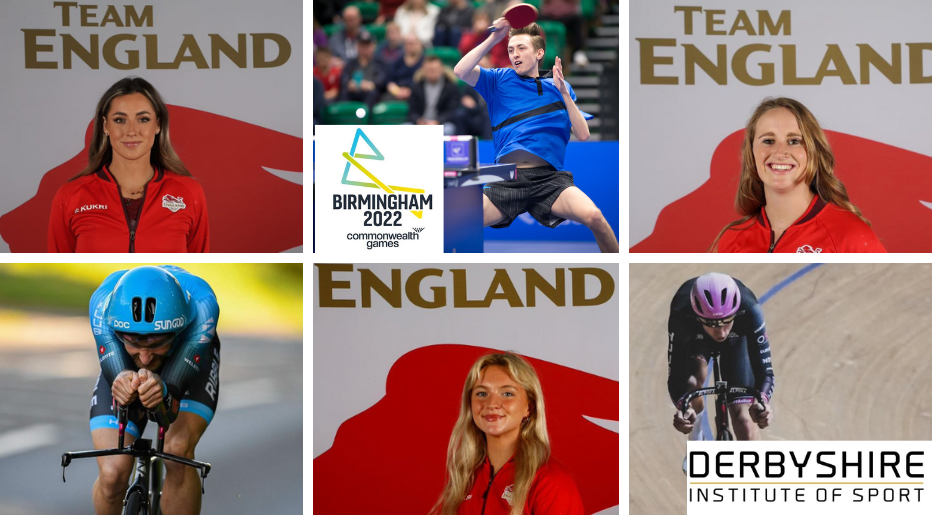