A tough training session, which makes your body ache, might sound like a nightmare to many of us, but DIS athlete Alex Knibbs, says it’s what he loves best.

Alex, who has been backed by DIS for the past five years, said: “I really enjoy the feel-good sensation after a tough session knowing that I’ve given my all and my head is cleared of all my worries for the rest of the day. I enjoy knowing that every minute, or second, of hard work is bringing me benefits through performance.”

But he does admit that he dislikes warming up: “I know it’s important, but if the human body adapted to just be warmed up straight away that would be great!”

He added: “I enjoy the social side and encouragement that comes with training in a group or with your coach.”

Alex, 20, is a 400 metre hurdler and also won bronze at the 2018 IAAF World Junior Championships for the 4 x 400m relay. He is also a member of Amber Valley and Erewash Athletic Club and a student at Loughborough University.

He has a positive approach to handling the pressure that comes with competing. He says he uses pressure to motivate himself by reminding himself that he has put in the hard work needed to turn in a good performance and he’s only feeling under pressure because he knows he can do well.

He said: “I tell myself that there is no need to worry. I have trained harder than my opponents so I can win.

“I produce my best performances when I’m under pressure because of how much the occasion means to me. So I am willing to push myself more than ever before to get the result I want.”

Alex believes this attitude was built up during his rise through the ranks of youth development from the age of 14: “You have to put yourself through these situations to learn from them.”

He was inspired to pursue athletics after watching world-class athletes at the Olympics and world championships.

He added: “Now, being at Loughborough University, I feel like I’m a step closer to reaching that top-class level because I now see and train with people at that level week in week out. So it’s like I’m almost one of them.

“Every year I am competing in higher-level competitions, getting closer to those professional meets. In that sense looking back at how far you’ve come and seeing your progress is also motivating but, getting to the top is always the main goal which is the long term motivator.”

DIS has been an important part of his progression because of the opportunity it has given him to surround himself with like-minded people, he said.

“I don’t think I would be the level of athlete I am now without DIS. They have given me strength and conditioning support that is truly at elite level.

“I have a great relationship with my S&C coach, and she understands me and what I need to work on. It’s hard work but everyone in DIS has that same hard-working mind set and the desire to be the best we can be.” 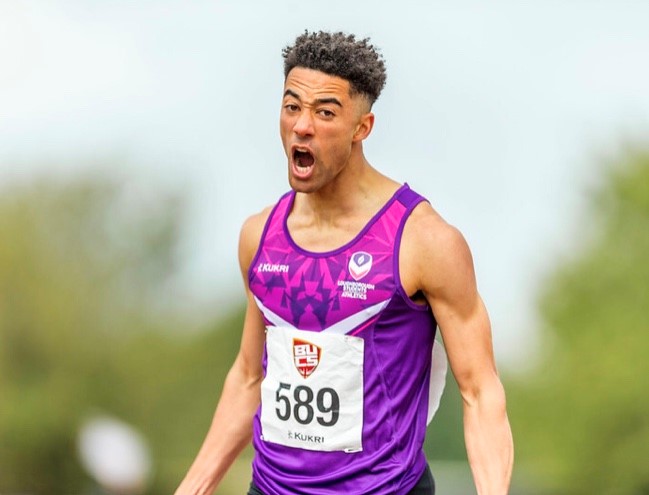